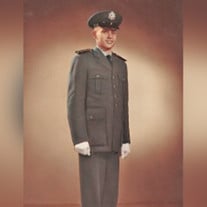 Edgar Paul Kuck, 83, of Pemberton Twp, NJ, passed away on Tuesday, March 22, 2022, at Granville Place in Burlington, NJ, surrounded by his loving family. He was born on March 31, 1938 to the late Paul and Marie Kuck. As a youth, the family relocated to Piscataway, NJ where he went on to graduate from Metuchen High School and Newark College of Engineering, one of the oldest and largest professional engineering schools in the United States. An extremely patriotic man, Edgar joined the United States Air Force in 1960 and spent the next 20 years working as a Precision Measuring Equipment Technician and a B-52 Electronic Warfare Officer, retiring with the rank of Captain. His assignments included Strategic Air Command duty stations at Offutt Air Force Base, NE, Loring Air Force Base, ME, Plattsburgh and Griffiss Air Force Base, NY; overseas assignments at Andersen Air Base, Guam. U-Tapao Airfield, Thailand; and finally a Mobility Air Command assignment at McGuire Air Force Base, New Jersey. He served honorably in the Vietnam War and was the recipient of the Distinguished Flying Cross, Bronze Star, the Air Medal with four Oak Leaf Clusters, National Defense Service Medal, Vietnam Campaign Medal, and the Vietnam Service Medal. Even with these accolades, Edgar remained a humble man. He would not be the one to mention his experience working on Department of Defense ground radars at the Bien Hoa Air Base, his small arms expert marksmanship, or how he heroically repaired a B-52 navigation system while under heavy fire during a campaign in Northern Vietnam, ensuring the safe return of his crew on the mission. If asked about his career, he would just say he was doing his job. This humility and devoted service inspired his children to follow in his footsteps of patriotism, all honorably serving in the Air Force. After retiring from the Air Force, Edgar went on to work as a quality engineer at Lockheed Martin in Moorestown, NJ, for more than 20 years with time spent working with the Aegis System on the USS Rancocas, otherwise known as the Cornfield Cruiser. Edgar is survived by his loving wife of 49 years, Rumpa Suwanvet Kuck; his sons, Michael Kuck and Noppong Suwanvet; his daughter, Nancy Ballesteros (Mark); his granddaughter, Maria Ballesteros; his sister, Doris Sirois (Paul); and several nieces and nephews. A Mass of Christian Burial will be at 11:00 am, on Thursday, March 31, 2022, at St. Ann’s Church, 22 Trenton Rd, Browns Mills, NJ 08015. Inurnment will be held at Arlington National Cemetery, at a later date. Arrangements are under the direction and care of the Moore Funeral Home, Browns Mills, NJ. Condolences for the family may be left at www.moorefuneralhome.com

Edgar Paul Kuck, 83, of Pemberton Twp, NJ, passed away on Tuesday, March 22, 2022, at Granville Place in Burlington, NJ, surrounded by his loving family. He was born on March 31, 1938 to the late Paul and Marie Kuck. As a youth, the family... View Obituary & Service Information

The family of Edgar P. Kuck created this Life Tributes page to make it easy to share your memories.

Send flowers to the Kuck family.